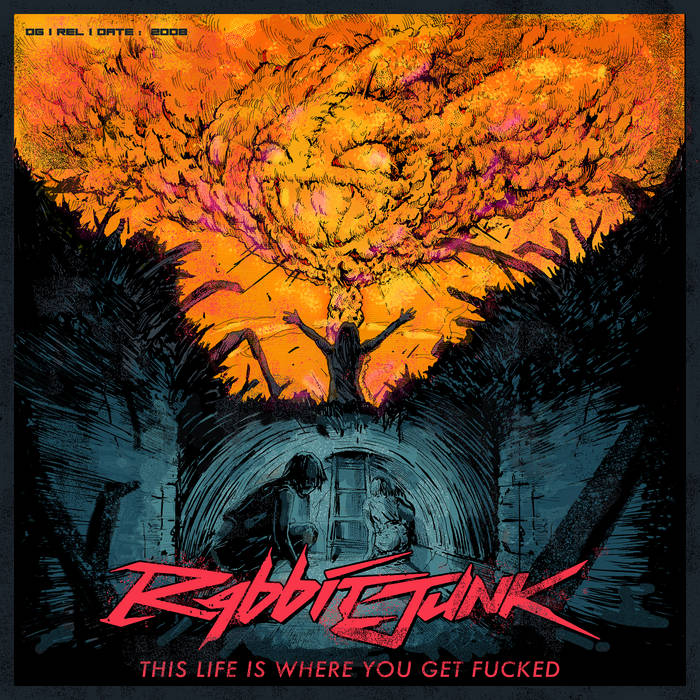 daisyangelteeth this album got me through so much shit back in the day, man. big ups & much love, forever <3 Favorite track: The Collection.

Cole Bratcher Holy crap, this Ghetto Blasphemy stuff is some of the most creative and amazing music I've ever heard! Who knew black metal and west-coast hip-hop went so well together? I guess Rabbit Junk did. Favorite track: Ghetto Blasphemer.

Ken Stoked that RJ was able to bring the older albums to Bandcamp. If you enjoyed the Self titled and Reframe albums, do not hesitate to pick this one up too! Favorite track: Guns.

Jimmy Underwood This album changed my life when i pirated it in 2009. It said what i was feeling during a messy divorce ...truly awesome feeling to own it legitimately.
Such a great album even now. Favorite track: Ghetto Blasphemer.

This Life is Where You Get Fucked is Rabbit Junk’s third album, released in 2008 on Full Effect Recordings. This album is a concept album, split into thirds. Each third carries a different musical style and a different theme: tracks 1-4, The Struggle, deal with war and struggle, and combine melodic death metal with drum and bass; tracks 5-8, Ghetto Blasphemer, are inspired by the works of H.P. Lovecraft, and combine black metal with West Coast hip-hop; and tracks 9-12, This Death is Where You Get Life, are about Seattle cyclists living lives of crime, and combine punk, death metal, and gabber.

Rabbit Junk’s 2010 album Project Nonagon is a direct sequel to this album, also split into thirds that are all sequels to this album’s sections.

JP Anderson on the album’s re-release:

“The concept: album split into three parts, each which explore a different combination of electronic and rock fusion and lyrical topic, roughly corresponding to "living, dying, and rebirth”. This record was originally released by Full Effect Records right in the maelstrom of 2008’s “great recession”. Our personal lives were pretty wrecked as well. Needles to say, the album title is pretty fitting haha! The album was a “compromise” in that the keys and loops were mixed low to make it sound more like a “rock record”. The result was that is deviated pretty substantially from what we had intended. Also, I can admit now that our knowledge of the social world at the time may not have been up to the task of the social commentary we attempted. But, as the album implies, you live and learn. Man, did we learn! And live! Ouch! This life IS where you get f’d ; )"